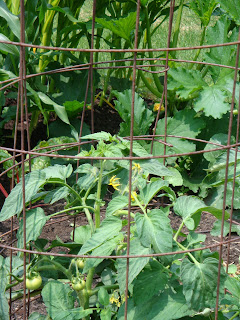 Tomato cages are used to cage tomato plants...Getting the plant off the ground and supporting it is the purpose for these cages so that the tomato will ripen beautifully instead of rotting on the ground. Indeterminate plants grow all over the place, so this caging helps to keep them in one spot as well as produce beautiful fruit. These supportive structures sometimes need to be staked in case of high winds.

We take 4' x 6' sheets of concrete re-enforcement wire and bend it into a circle to make the cage. The cost for this cage is about $5.00 and can be used again every year.
Posted by J.Q. Rose at 2:53 PM 4 comments: 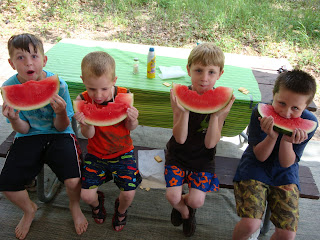 There's nothing better to cool you off in the summer time than a delicious, cold watermelon.
The first day of summer and I picked our first cucumber. It's a refreshing treat on a warm day.
For supper tonight we had cole slaw and chef salad and cauliflower with cheese sauce all compliments of our veggie garden. I hope you are enjoying the fruits of your labor. My DH said he planted the seed for the cauliflower on March 4 never realizing he'd be enjoying it on his plate the first day of summer. 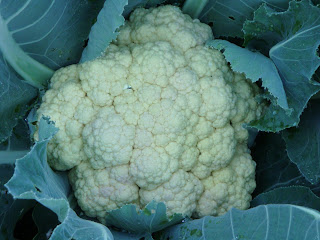 Cheese Sauce for Veggies
2 T. margarine melted in pan
Stir in 2 T. flour
Whisk in a cup of milk over medium heat and let it thicken for about a minute.
Add about 1 cup of grated cheddar cheese to your taste and let it melt. Sprinkle on salt and pepper if you wish.
OR
If you want to make a cheesy dish real fast, just throw on a slice of American cheese (I usually get the slices made with 2% milk.) Place the dish in the microwave for 20-30 seconds to melt over the veggie.  Sometimes the cheese melts as soon as it is placed on the hot vegetables.
Enjoy!
Posted by J.Q. Rose at 9:59 PM 1 comment: 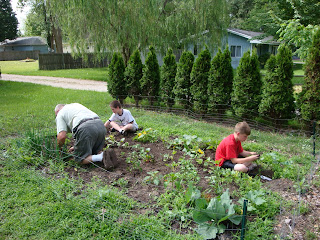 Noah, in white shirt, cousin Corbin, and Grandpa had a weeding party the other day weeding Noah's Garden. 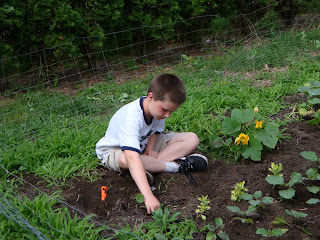 Noah is carefully clearing Every weed from his garden. See that concentration?
This has been quite a learning experience for our almost ten year old grandson. This year he is gardening in his own garden, not Grandpa's, and he lives about thirty minutes from us. Grandpa is not there all the time, so Noah is in charge. He learned a good lesson this summer. He watered the garden and shut off the nozzle, but forgot to turn the water off at the outdoor faucet. After the hose which was filled with water baked in the hot summer sun, it exploded. I am sure he will never forget to turn that faucet off again!!

Alert: Entry Registrations for Your County Fair are Due Now 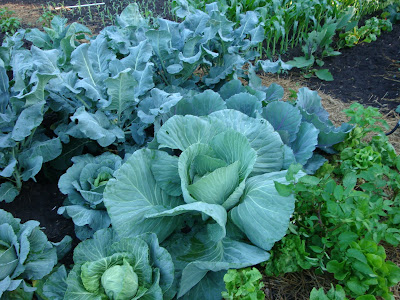 If you or your child plans to enter veggies,flowers, or projects in the county fair, you must sign up by July 1 in Michigan. Our county fair is Aug. 7, but registration is done at least a month ahead of the actual fair. Check with your fair to see when the deadline is...Our grandson Corbin's cabbage is "ginormous", heads above ours...okay, yes the pun is intended.

A Grudge Against Slugs

Yeewwwwww----there is nothing more disconcerting than cleaning a beautiful head of Might Joe lettuce and discovering slugs....Slugs, imagine a snail without its shell, are a problem for us this year. These slimy creatures which could star in a B Hollywood horror movie are voracious eaters and leave a trail of slime on the plants as they eat through your garden at night.

They love moist habitat, so if overwatering or rains occur, be prepared to battle the nasty invaders.

There are many home gardeners methods of ridding the garden of slugs. The simplest is to hunt them down and squish them or take a salt shaker to the garden in the night. Shaking salt on them will cause the slug to dry out, but don't over do it since salt is deadly for growing plants.

We also have the drinkers solution to killing plants. Placing a saucer of beer near the infested area will draw the slugs for party time, but when they decide to crawl in for a sip, they will drown in the beer. Be sure the saucer is deep enough that the slimy creature can't crawl out after imbibing. Spreading coffee grounds is a much touted method of killing slugs, however, we have not used them. From research on the Internet it appears that it is more of a wive's tale that coffee grounds actually kill, but may be a deterrent. Most of the information does not give credence to the use of coffee grounds.

My DH mixed up a combination of one part ammonia to nine parts water and sprayed only in the areas where he found slugs in our lettuces. He said the varmints aren't so evident now, but it could be that the areas are drier now.

Do you have any ideas on killing these disgusting creatures? We would all be much obliged to hear your method. Thanks.
Posted by J.Q. Rose at 12:36 PM 2 comments: 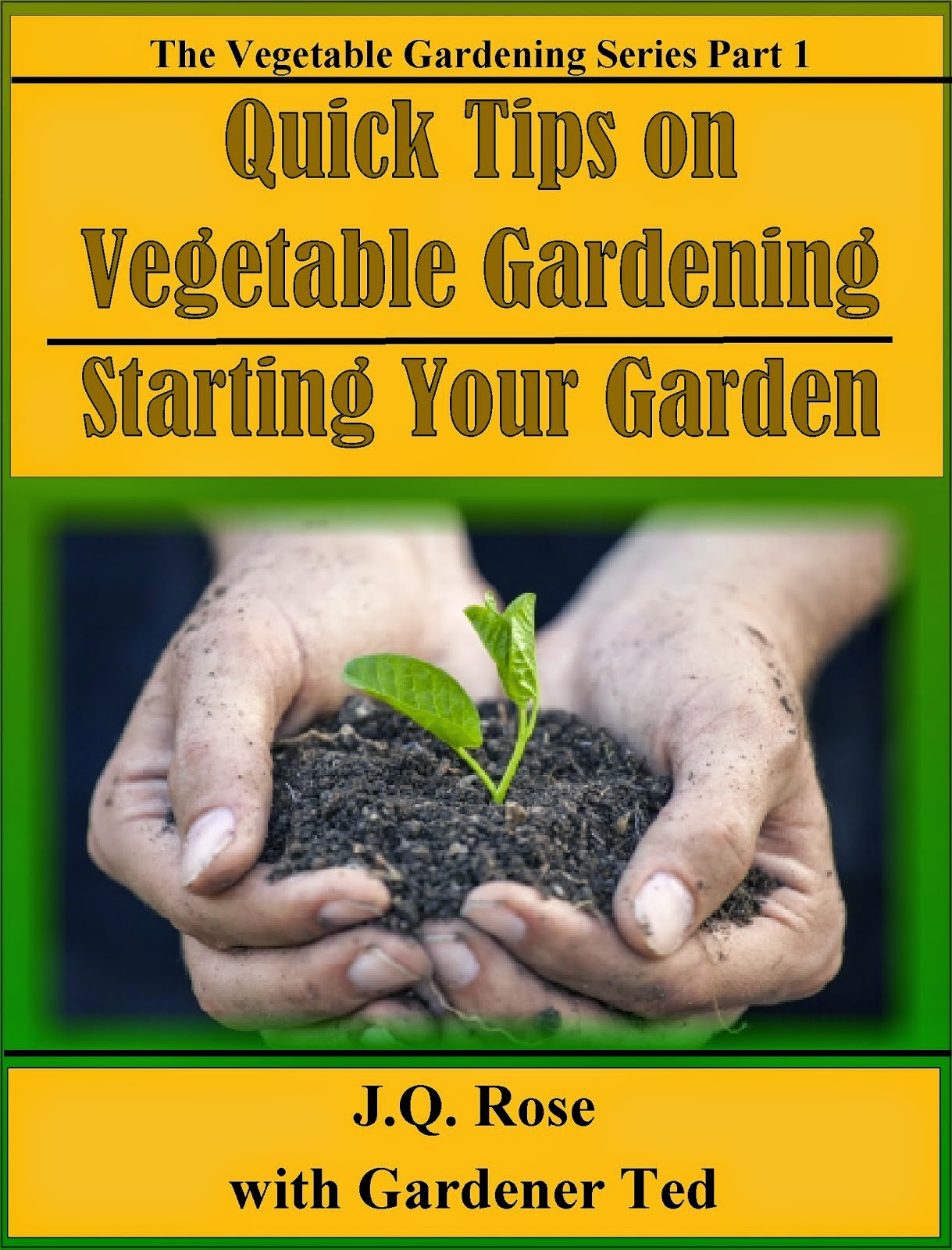 Welcome to the Garden for Eatin'

I am excited to share with you all the practical gardening knowledge that my husband and I have gained through our many years of gardening. I will also include recipes and tips on vegetable gardens that you are welcome to try.

If you have helpful gardening tips or fabulous recipes to share or a constructive insight on a topic, please do so. 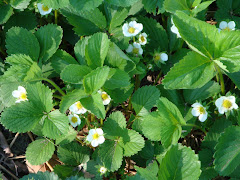 Why do you have a vegetable garden? Perhaps you want to enjoy fresh vegetables for good health. I have several recipes that use your produce to make nutritious, tasty meals. (Ummm...maybe some aren't always real nutritious, but they are delicious!!) Click on recipes in the label section to see what you need or click on a vegetable name to see if there is a recipe using that food.

Do you have a great garden recipe? Please share it with us. Thanks!!

J.Q. Rose
Michigan, United States
Welcome to the Garden for Eatin' blog where we offer tips and advice on vegetable gardening. When it comes to gardening, Ted does the planning and growing. J.Q. prepares the vegetables for meals and writes about vegetable gardening. Her articles have been featured in newspapers, magazines, blogs, and online magazines. Gardener Ted developed his tried and true gardening tips as a lifetime gardener, greenhouse grower, and garden center business owner. Growing up on a farm in Central Illinois cultivated his love of gardening at an early age. The married couple shares the joy of gardening with their four grandsons and granddaughter who are a lot of help when it comes to gathering and eating the produce from the garden. Besides gardening, they enjoy traveling, camping, and playing the board game, Pegs and Jokers. .